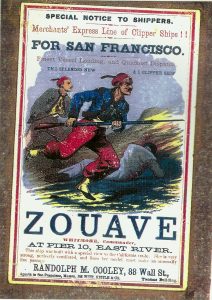 In the summer of 1718, the first organized company of Presbyterians, of which we have any knowledge, left the shores of Ireland in 5 vessels, containing 120 families, for the new world, and arrived safely in Boston, August 4, 1718. Here all was new, the wilderness and the world before them. Imagine this little colony, strangers in a strange land, seeking new homes and not knowing whither to turn. There they lie at the little wharf at the foot of State Street in the town of Boston, which then contained about 12,000 inhabitants, taking counsel where to go, and how to dispose of themselves and their little ones, to begin the world anew. With their wonted energy, they were soon astir. One brigantine, with a company of 20 families, sought their fortunes at the eastward, among whom were Armstrong, Means, McKean, Gregg’-they spent a hard and long winter in Portland harbor, and then most of them fled westward, to join their companions in founding their new Londonderry NH. Robert Means and his family stayed in the Casco Bay region including Saco, Old Orchard Beach, and Flying Neck.

The Means Family in Maine

Painting of Means House, Stroutwater ME home of James and Mary (Cox) Means 1753-1832

Saga of the Sea by Edgar Means Journal of times on the sea.

Scots Irish Self Reliance on the Eastern Frontier Lecture    YouTube lecture on the Dummer Claim with many references to Thomas Means, Flying Point, Maine by the Maine Ulster-Scots Project

Revolutionary War Records – James Means Means, James Major; He was born in Gorham, Maine in 1753 and resided there where he died on 15 Oct. 1832. He is buried in the Stroudwater Cemetery in Portland, Maine. He has a  granite monument left of the main gate. Service: He was a Pvt. In Capt. William Hart’s Minuteman; Under Col. Ed. Phinney’s  Regt.